BEST BULBS IN THE DETROIT AREA!

European Tanning Club in Dearborn and Dearborn Heights offers clean, convenient spray tanning and tanning beds near Detroit. Voted the Best Place To Fake and Bake by the Detroit Metro Times, you know you are getting one of the best tanning experiences in Michigan when you walk in our doors.

It goes without saying that we love being tan and offering tanning services to other people who love being tan. However, to truly understand how important tanning is in American culture, let’s take a look at the history of tanning.

For centuries, men and women desired to be as pale as possible. Pale or fair skin signaled high social status because it meant a person spent their days indoors and didn’t have to labor outside under the hot sun. During the Victorian Era, pale skin was so desirable that women would use mercury and lead-based skin lighteners to get a ghostly white appearance. Until the 1900s, many aristocratic citizens would completely cover their bodies when outside, including big sun hats and umbrellas.

The Benefit Of Sunlight Is Discovered

In 1903, a Nobel Prize in Medicine and Physiology was awarded to Niels Ryberg Finsen, a physician who used “light therapy,” a combination of sunlight and artificial light, to treat conditions such as lupus, tuberculosis, rickets, and simply “sickly children.” Other physicians followed and used sunlight and light therapy treat depression and other conditions.

While more people started to see the benefits of being in the sun, others still felt that the appearance of tanned skin was unsightly – especially for women. Skin-lightening and bleaching beauty products still flew off the shelves.

When the flapper age in the 1920s hit, dresses got shorter and more skin was exposed than ever before. While women danced and drank like never before, they also enjoyed other freedoms like suntanning. This was partially spurred on by none other than fashion icon Coco Chanel. The fashion designer was photographed with beautifully tanned skin after a luxury yacht trip along the French Riviera. Suddenly, every woman longed for this new sun-kissed complexion.

This brought on a new era of tanning. Those who lived upscale lifestyles spent time outdoors and took tropical vacations to perfect their tan. Yet still, the ability to change your skin tone was still an aristocratic game. Those who could not afford to run off to French beach resorts or lay out in the sun still had the skin they were born with.

Risking Sunburns For The Sake Of Suntans

The desire for tanned skin came with a cost. Sunburns were so common that Vogue, in 1929, described the era of tanning as a “sunburn movement.” Though, people were hardly phased. If anything, many people knew that a sunburn would fade into a golden tan in a few days. The clothing industry saw another change from the flapper-era of the 1920s. Leisure clothing that involved skin-revealing bathing suits, short shorts, and tank tops became common among women and men who wanted to show off their tans at the beach.

Of course, not everyone enjoyed being sunburnt. In the late 1930s and early ‘40s, preliminary versions of UV-blocking sunblocks started to become available, promising a tan without the burn. Not too long after, the bikini was introduced in 1946 and suddenly all-over tans became more feasible. While some turned to sunscreens to block out some UV rays, other drenched their bodies in baby oil to heighten the effects of the sun.

In the 1950s, Coppertone came out with one of the first widely available, affordable sunless tanning options. Quick Tan, called QT for short, used the same active ingredient that modern sunless tanners use. DHA, a chemical derived from sugar cane, was used to cause a chemical reaction with the skin that would darken it, rather than simply stain it. Like modern spray tans, this self-tanner was marketed towards both men and women equally. It promised men a “handsome, rugged-looking tan,” and women were told this product would make them have a smooth, glamorous tan all year long.

While at-home tanners worked decently well, the products continued to develop to give more of a natural glow and less of an orange look. The first modern tanning bed was available in 1978, and by the late ‘90s, tanning salons offering spray tan services took off.

Since tanning first became popular, scientists and cosmetologists have been working to create safer, natural-looking tanning options that don’t involve baking in the sun for hours at a time.

You Can Have A Perfect Tan At Our Detroit Tanning Salon

European Tanning Club offers men and women in the Detroit area the ability to have a year-round glow, even in the cold winters! Our tanning advisors are experts at helping you pick the right sunless tanning option for your skin tone and type to get you the golden tan you desire.

Whether you are looking for professional spray tanning or want to use our 32 or 64-lamp tanning beds, we have the best products and machines to get you a perfect tan every time. With two locations, our tanning salons in Dearborn Heights and Dearborn are always close by to give you a healthy, vibrant glow -0 no sunburns or baby oil required! Schedule an appointment today! 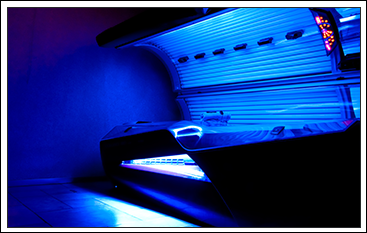 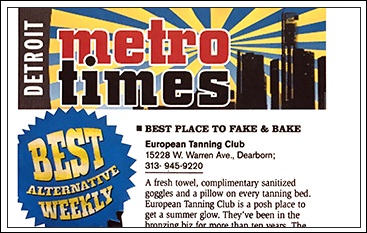 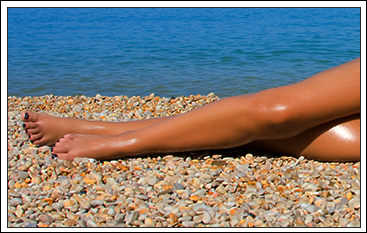